In recent years, there has been an increase of misuse related to designer benzodiazepines (DBZD), a subcategory of novel psychoactive substances (NPS). Benzodiazepines are commonly prescribed for their anxiolytic, muscle relaxant, sedativehypnotic, and anticonvulsant properties, but due to their widespread availability and relatively low acute toxicity, there is a high potential for misuse and dependence. Therefore, in the era of analogs of commonly used substances emerging on the drug market as suitable alternatives, it is not unexpected that designer variants of benzodiazepines have become available and in demand. Compounds of this class may have either been repurposed from pharmaceutical research, chemically modified from prescribed benzodiazepines, or obtained from diversion of pharmaceuticals available in other countries.

Flualprazolam, a fluorinated analog of alprazolam, is an emerging designer benzodiazepine with increasing prevalence, which is an example of a modification to a prescribed benzodiazepine. It was first patented in the 1970s but never marketed, so it has been repurposed for recreational abuse from pharmaceutical research as well (1). Its chemical characteristics and structure are listed in Figure 1. Flualprazolam is a high potency triazolo-benzodiazepine with sedative effects similar to other benzodiazepines (2). It is marketed by internet companies for “research purposes” as an alternative to alprazolam and discussions on online forums suggest that flualprazolam lasts longer and is stronger than alprazolam, its non-fluorinated counterpart (3). Onset of action for flualprazolam is reported to be 10-30 min with a duration of action ranging from 6-14 h (4).

Flualprazolam was first detected on the European drug market in 2018, adding to a growing list of designer benzodiazepines being monitored by the European Monitoring Centre for Drugs and Drug Addiction (EMCDDA) (5). More than half of the listed 23 substances of the designer benzodiazepine class have emerged since 2015, so overall this group of substances is increasing in popularity (6). The Drug Enforcement Agency (DEA) reported its first chemical identification within the United States in 2018; there have been an increasing number of reports from seized drugs between Q1 and Q2 in 2019 (7, 8). The Center for Forensic Science Research & Education reported its first detection of flualprazolam in a biological specimen in March 2018 through data-mining TOF screening data from authentic specimens, with 2 additional detections in June 2019 (9). In addition, flu alprazolam was also detected in 1 of 13 postmortem bloods collected between 2016-2018 in NY af ter re-analysis with an updated designer benzodiazepine panel (10). 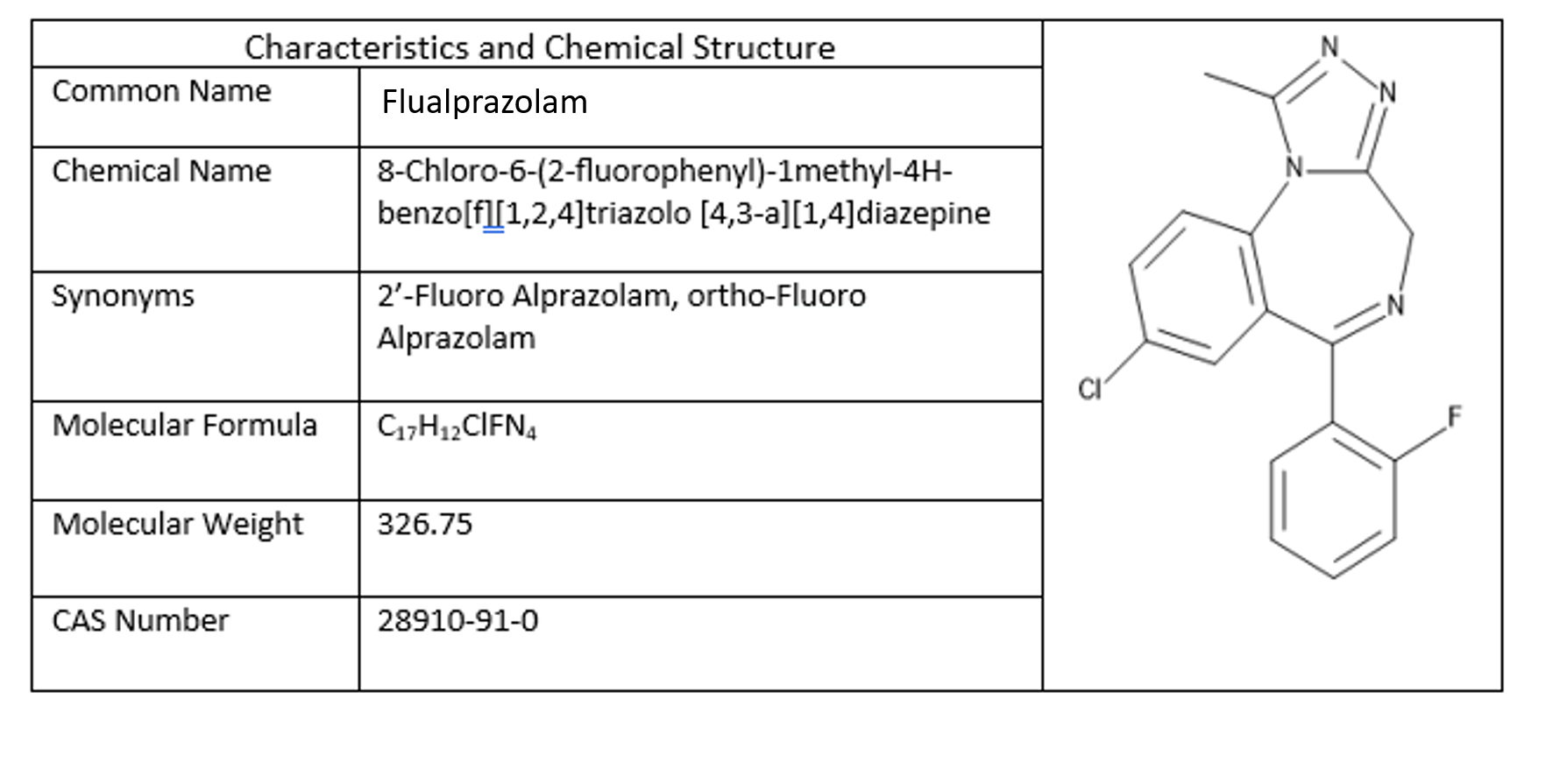 Sacramento County, California reported its first confirmation of flualprazolam in biological specimens in May 2018. Between May 2018 and August 2019, 124 cases of flualprazolam were confirmed by the laboratory in submitted blood specimens. Of the 124 positives, 123 cases were submitted from Driving Under the Influence of Drug (DUID) investigations. The concentrations ranged from 5-154 ng/mL, with average and median concentrations of 25 and 18 ng/mL, respectively; the reporting limit for the method was 5 ng/mL. The distribution of concentrations for these DUID cases is shown in Figure 2. The detection of flualprazolam has outpaced the detection of alprazolam in this county. 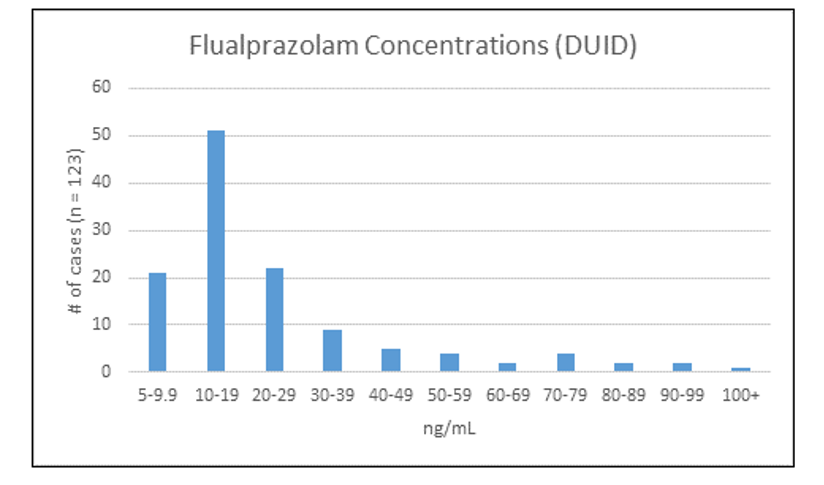 Flualprazolam is used as a central nervous system depressant, including its sedative/tranquilizer and muscle relaxant properties. Adverse effects of benzodiazepines can include sedation, reduced anxiety, loss of consciousness, impaired balance, incoordination, impaired cognitive abilities, muscle weakness, confusion, slurred speech, dizziness, and lethargic behavior. Misuse of designer benzodiazepines such as flualprazolam can produce cognitive and motor impairment after acute use, potentially contributing to traffic accidents and other poor driving behavior. Like pharmaceutical benzodiazepines, designer benzodiazepines can have severe toxicity when concomitantly used with other CNS depressant drugs, such as opioids and alcohol, which increases the risk of respiratory depression and death.

Flualprazolam and many DBZD have never undergone the clinical testing that is required for licensed medicines and the increasing availability of these substances may pose serious health risks to drug users. Flualprazolam, when sold on the illicit drug market as the counterfeit form of another prescription drug, poses a significant threat to end users due to an increased risk of unintentional overdose and intoxication (4). Flualprazolam has been reported as the active ingredient in counterfeit alprazolam on a harm reduction website in the United States so these users may or may not know the true identity of the substance they are ingesting (12). As an emerging designer benzodiazepine, forensic toxicologists, seizeddrug and toxicology laboratories, law enforcement, hospital personnel, and public health officials should be aware of the increasing prevalence of flualprazolam and the threat it poses to public health and safety. Laboratories should consider adding flualprazolam to their scope of testing in order to truly understand the prevalence of this NPS in the United States. 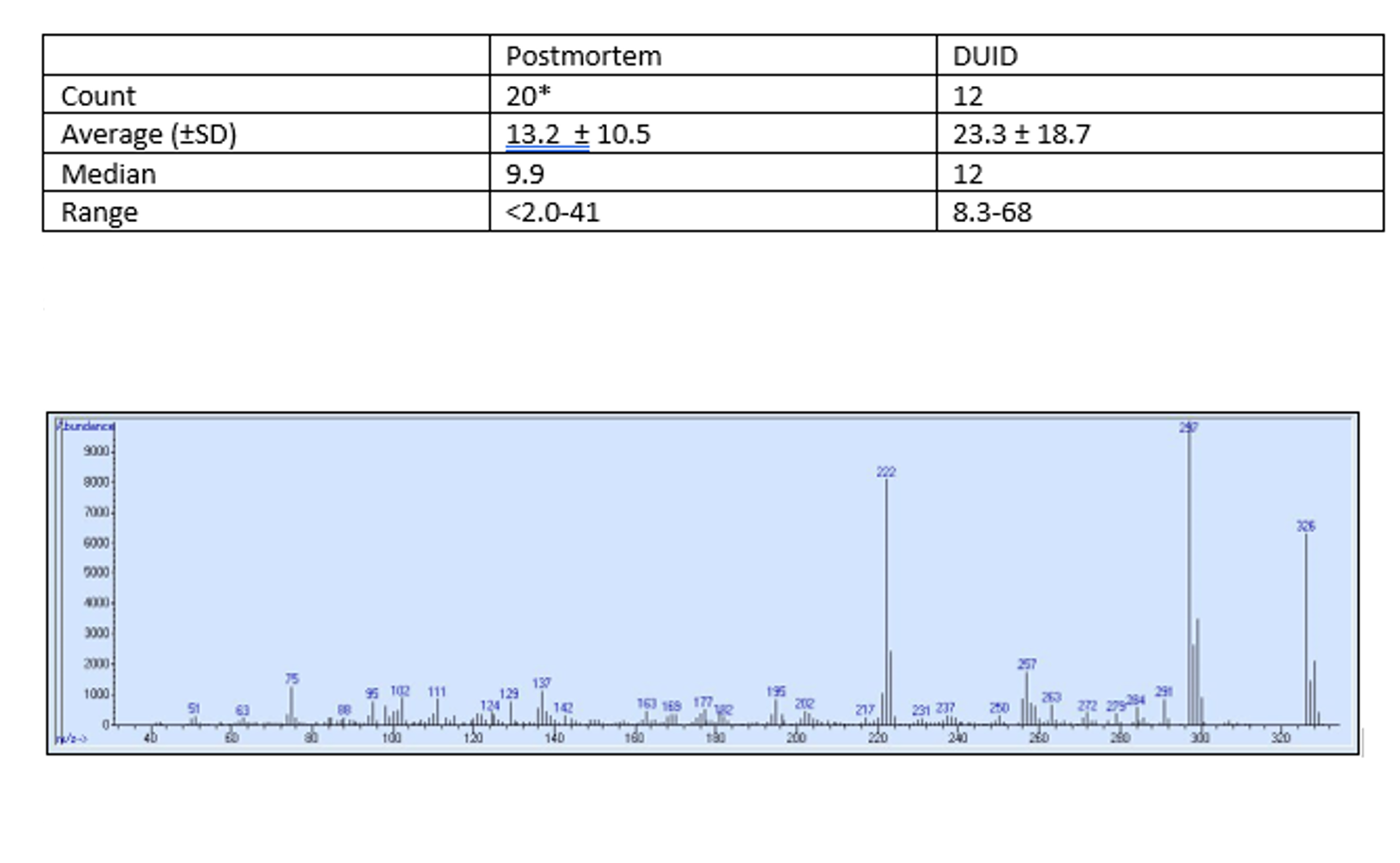