Kratom use is becoming widespread in the USA and internationally. Its major psychoactive ingredient, mitragynine, represents significant challenges in both testing and interpretation.

Mitragynine is the primary active drug in the leaves of the tropical tree Mitragyna speciosa. Preparations and extracts of the leaves have historically been used for their psychopharmacological effects and have gained popularity in the US. While kratom is not regulated or scheduled in the US at the federal level, it is illegal in several states.

The effects of typical recreational doses of mitragynine are reported to include euphoria, relaxation, increased energy, analgesia and sensory enhancement. At higher doses the drug is a µ-opioid agonist with analgesic effects and is gaining increasing use in the treatment of chronic pain and opioid cessation therapies to minimize the effects of withdrawal.

The lab analysis and testing of mitragynine is challenging due to the number of related compounds present in the plant, and the fact that the drug has three chiral centers, with up to eight diastereomers, all with similar mass spectra. NMS Labs is the first commercial lab to develop and offer both clinical and forensic testing for this compound.

Learn about Mitragynine, a compound found in the leaves of a Kratom plant and its impact on poison control centers,  investigations of death and/or driving under the influence of drugs (DUID) 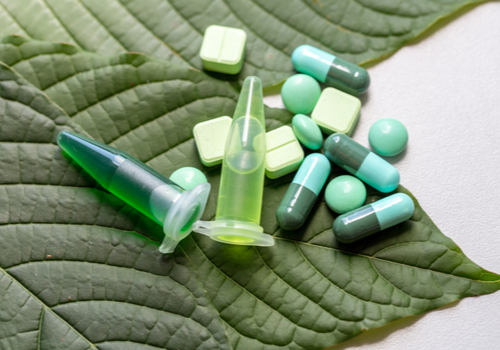 Have a Sample for Analysis?

Let's Connect for a Consultation

NMS Labs stands ready to partner with you for your Mitragynine testing needs. Please complete the information below and a representative will be in contact to discuss the needs of your organization.